We are currently witnessing a revival or resurgence in far-right movements and activism, as well as populist radical right politicians and parties, across Europe and in the United States. Some had resigned this set of ideologies to the dustbin of history following the second world war, and again following revivals at different junctures and in different contexts in the post-war period (e.g. the 3rd era Klan in 1960s America and the National Front in 1980s or BNP in early 2010s Britain). In response to today’s situation, we are seeing a flurry of political statements, media articles, radio and podcast episodes, TV documentaries and publications (by journalists, academics, activists, monitoring groups and a variety of ‘experts’). As someone who works on the far-right, it is a particularly important time to be doing my research in order to both help develop a better understanding and oppose them, for the threat they may pose to civil society and those groups who they most directly target. This is also important after a decade and a half of politicians, media and commentators conflating Muslims with extremism and terrorism, which not only ignored the far-right, but fuelled and legitimised their hate and mobilisation. 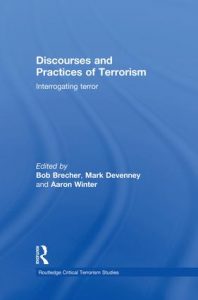 I am acutely aware of issues and potential problems related to researching and focusing on the far-right. These include the risk of elevating and amplifying the ‘extreme’ and the threat that it poses, and distracting from or ignoring mainstream, state, institutional, structural and everyday racisms that can fuel the far-right or be rendered more acceptable, legitimate or invisible by being juxtaposed with them. This is particularly the case in the so-called ‘post-racial’ context, where the far-right has been taken to stand in as the primary site of racism that can be denounced as marginal and unacceptable and be rejected from polite, tolerant, mainstream society and politics. This allows for the continuation and perpetuation of less overt, structural and institutionalised racisms, what Eduardo Bonilla-Silva refers to as ‘racism without racists’. The potential danger of deflection and distraction is also a factor in work on radical right or populist political parties. Their elevation can serve to promote their message or be evoked as a threat to establishment parties with less overt ‘mainstreamed’ racist and xenophobic rhetoric and policies, who are defended and promoted in response. This problem is even more acute with work on extra-parliamentary and paramilitary groups, such as those I research. These are groups who some might argue have little or no power or platform if it were not for journalist reporting or academic research.

Informed by sociology, criminology, history and politics, and shaped by an anti-racist perspective, my research addresses these very issues and criticisms head on. I argue that work on the far-right needs to be understood in relation to the mainstream (the state, establishment political parties, institutions, civil society and the media) and that the nature of that relationship (supportive, legitimising, overlapping or oppositional) is not fixed, but contingent and changing. Often this depends on whether they share ideologies, enemies and interests, what functions they fulfil for each other and what the state will tolerate. Moreover, I argue that racism should be central to the analysis of the far-right, as opposed to being merely a characteristic in a taxonomy. As such, my work is primarily concerned with the historical development and transformation of the far-right in respect to its changing relationship with the mainstream and the state and changing racial/racist discourses, ideologies and identities.

These issues were particularly important when I started my DPhil in 1999. My research at the time focused on the post-civil rights or ‘5th’ era far-right. In response to civil rights legislation, FBI investigations and the House Un-American Activities Committee hearings into the Ku Klux Klan and wider far-right in the 1960s, they largely abandoned the mainstream approach, identifications, influence and objectives of their Klan predecessors, who sought to defend and maintain legal segregation and white supremacy in league with elected officials, law enforcement and civil society. Instead, this far-right underwent a process of paramilitarisation and Nazification, taking up arms against the government and pursuing a strategy of isolation, insurgency, white separatism and terrorism, culminating in the Oklahoma City bombing in 1995.

After this period of far-right marginalisation from the mainstream, compounded by the post-9/11 focus on ‘Islamists’ and the Obama era ‘post-racial’ narrative, Donald Trump’s campaign, election and presidency has brought the far-right back into the spotlight, in the form of white nationalists, supremacists and identitarians, neo-nazis and neo-confederates. Trump’s racist, nativist, Islamophobic, anti-immigrant rhetoric and policies (from Mexican walls to Muslim bans), as well as backlash politics and nods to white nationalism, victimisation and nostalgia (‘Make America Great Again’) led him to be endorsed by the far-right, including David Duke, the Klan, the American Nazi Party, Stormfront, Richard Spencer and the ‘Alt-Right. Trump provided a platform (albeit with the assistance of Breitbart and the mainstream media), and emboldened them, as they marched in his name at Charlottesville.  It also contributed to the mainstreaming and normalisation of racism in government and throughout ‘civil’ society. This has made the distinction between the far-right and mainstream much less of an issue, and my work on this changing relationship more pressing, particularly around racism.

I am currently working on several interconnected, comparative and interdisciplinary projects to understand the resurgence and mainstreaming of the far-right in the US, as well as the UK and Europe, at this current juncture, and explore these issues. Namely:

Historical Perspectives on the Far-Right 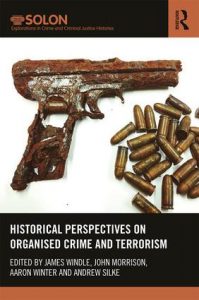 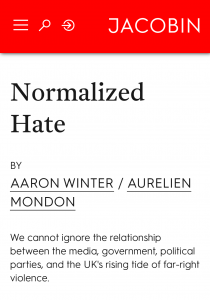 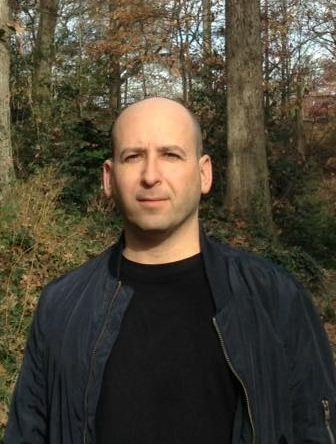 “Running through the first two projects is an examination of the politics of loss and crisis, particularly concerning perceived white male victimisation and national decline, that has been central to far-right mobilisation and ideology historically, but plays a role in their convergence with the mainstream at certain points in time, including today”.
Dr. Aaron Winter

I have also been involved in the ESRC seminar series project ‘Racism and Political Mobilisation’ (with Gargi Bhattacharyya and Satnam Virdee) and the University of East London (UEL) London Scholars project: ‘Step Up to Stop Hate’ (with Sally Holt and Tim Hall). While both projects, like my wider research, focus on racism, they are also an opportunity to emphasise anti-racism. In ‘Step Up to Stop Hate’, I ran workshops on hate crime awareness, intervention, training and campaigning in East London schools, helped develop strategies to challenge and combat it, and engaged with communities, which I view as an instrumental deployment of my expertise in – and against – racism and extremism.

Aaron Winter is Senior Lecturer in Criminology and Criminal Justice at University of East London.

Bonilla-Silva, E. (2006). Racism without Racists: Color-Blind Racism and the Persistence of

Mondon, A. and Winter, A. Forthcoming. Reactionary Democracy: Populist Hype, Racisms, the Far-Right and the Lack of Political Imagination. London: Verso.

Winter, A. 8 Dec. 2015. ‘White Terror and the Racialization of Violence’, Open Democracy. https://www.opendemocracy.net/aaron-winter/white-terror-racism-and-racialization-of-violence.

Winter, A. 2018. ‘The Klan is History: a historical perspective on the revival of the far-right in ‘post-racial’ America’. Historical Perspectives on Organised Crime and Terrorism. eds. J. Windle, J. Morrison, A. Winter and A. Silke. Abingdon: Routledge.