During the last decade, under a succession of centre-left governments at the national level, Brazil has made great strides, both in lifting millions out of poverty through the Bolsa Familia social programme, and in tackling institutionalised and social racism through new affirmative action policies for black, brown and indigenous Brazilians in federal public universities and employment (there are also quotas in state-level universities and employment, but these vary from state to state). The “quota law” of 2012, as affirmative action is known in Brazil, mandated that 50% of all university places in federally funded public universities be reserved for students from public secondary schools. Within this 50% quota, 25% of seats are set aside for low-income students and 25% for non- low-income students. Within each 25%, a further sub-quota is reserved for self-declared black, brown and indigenous students in accordance with their proportion in the state population. In 2014, affirmative action was extended to federal public employment, with a law mandating that 20% of all federal civil servant posts be reserved for self-declared black or brown candidates.

In just a few years, quotas have transformed the university landscape in Brazil. Federal public universities are the most prestigious, selective and high quality in Brazil; traditionally, mostly white students from privileged backgrounds who have attended private schools have dominated them. Access was determined by a competitive university entrance examination known as the vestibular; more recently, students are judged based on their score on the secondary school leaving exam, or ENEM. Since the passing of the 2012 quota law, the access of both low-income and black students has increased dramatically in federal public universities. According to the census of higher education in Brazil, carried out by Inep (National Institute of Educational Study and Research), in 2011, black/brown students represented 11% of all students. In 2016, the last year the census was carried out, the percentage had jumped to 30%.[1]

With the rise of the far-right presidential candidate Jair Bolsonaro, who was elected President of Brazil on the 28th of October after a run-off with the centre-left candidate Fernando Haddad, these, and other human rights gains, are now threatened. Bolsonaro has promoted hate speech and repeatedly insulted and denigrated the majority of Brazil´s citizens: women, the LGBT community, black Brazilians, and indigenous Brazilians. Bolsonaro is a retired soldier and career politician, who openly supports Brazil´s military dictatorship (1964-1985) and defends the use of torture. [2] [3] Despite portraying himself as ´anti-establishment´, Bolsonaro has been affiliated with nine different political parties throughout his political career, which began in the state of Rio de Janeiro in 1998.

Bolsonaro has been most openly hostile and hateful towards the LGBT community, boasting that he would beat a same-sex couple showing affection in the streets, and recommending giving a good thrashing to a son that shows signs of being gay. [4] [5] However, Bolsonaro has made clear through repeated statements that who he considers to be worthy of respect and full citizenship also excludes women, black people, and indigenous communities, all of whom he has positioned as somehow not belonging in Brazil. In particular, he has attacked the legitimacy of Brazil´s affirmative action policies in higher education, arguing in a TV interview in 2018 that he had “never enslaved” anyone and hence neither he nor Brazil as a whole has a debt to repay Brazil´s majority black population that was enslaved for 300 years (TV Cultura). [6] Brazil was the last country in the Western hemisphere to formally abolish slavery, in 1871, and its legacy is still painfully evident in the fact that ´poverty has colour´ in Brazil: the majority of its poor and uneducated citizens are black. However, for Bolsonaro slavery is essentially the fault of black people themselves, for according to him “the Portuguese didn´t even tread on African soil, it was the blacks who handed over the slaves”, in a clear attempt to absolve the Brazilian state and society of its collective responsibility for centuries of racism.

Although racial quota policies in higher education were unanimously declared constitutional by Brazil´s Supreme Court in 2012, Bolsonaro´s ideological attacks on affirmative action and his promise to reduce the percentage of quotas[7], have served to strengthen the argument of conservative activists that affirmative action should be based on income alone, and not take into account race. The ´social quota´ argument denies the pervasiveness of racial discrimination in Brazil, and sees only the cleavage of class, feeding into the long-standing popular myth and ideology of a “racial democracy” in Brazilian society. In the past (2011), Bolsonaro affirmed in a TV interview that he would not enter into a plane flown by a “quota pilot”, nor allow himself to be operated on by a “quota doctor”, further promoting the myth of a white and upper-class meritocracy while implicitly calling into question the competency of professionals who have accessed higher education via, in addition to their own hard work and study, affirmative action. [8]

Beyond affirmative action, Bolsonaro has also attacked the demarcation/protection of indigenous land, which prevents commercial exploitation of indigenous territory, and the residents of quilombos, historically rural communities of escaped slaves; today autonomous communities of their afro-descendants. In 2017, in a speech to the Hebraic Club of Rio de Janeiro, Bolsonaro spoke disdainfully of a visit to a quilombo, where he highlighted the obesity of the residents and how “they don´t do anything”, and “would not even be able to procreate”, arguing against spending money on such communities. [9] I recently visited a small quilombo on the outskirts of the city of Belo Horizonte in the state of Minas Gerais, and found a quiet, industrious community with a church and community centre- and no sign of obesity greater than in the general Brazilian population. 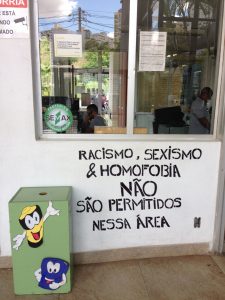 The effects of Bolsonaro´s vitriolic hate speech is already being felt with an increase of violent homophobic attacks on gay men; homophobic language is so common in Brazil that it is not even remarked upon. His strong opposition to feminism/women´s rights, the humanity of gay people, affirmative action, and indigenous/quilombola communities is a huge setback for democracy and human rights in Brazil. While it may seem shocking and confounding to non-Brazilians that someone with such extreme and anti-democratic views could not only be popular, but win the presidency of the most populous nation in Latin America, my informal conversations with Brazilians of all colours, asking them: is Bolsonaro racist?, may explain why- the majority of them do not consider Bolsonaro to be racist, despite his ample comments attacking affirmative action and suggesting that black students are not meritorious. He has even implied that marrying a black person is synonymous with not being well-brought up, in response to a question from Preta Gil (a Brazilian singer) regarding how he would react if one of his sons married a black woman on the television programme QCQ (2011). [10] Although such comments are on the record, they are frequently dismissed as fake news by his supporters.

The most insidious effect of Bolsonaro´s verbal poison on Brazilian society will be to further normalise and legitimise the deep-rooted homophobia, sexism and racism that exists in Brazil, and to narrow, socially, and perhaps also legally, full citizenship rights for Brazil´s most vulnerable groups. To the adolescent black girl striving to accept her ´negritude´ (black identity) and embrace her natural black hair (labelled ´ruim´ or bad colloquially), to the young gay man struggling to reconcile his sexuality with his faith, to the millions of Brazilian women trying to balance career and family life, seen as ´their´ responsibility, Bolsonaro offers a vision of the world in which the white, male, straight norm is solidified, reinforced and celebrated, and the problems of minorities are seen as their own, rather than collective, societal problems resulting from centuries of institutionalised discrimination. Although women mobilised in large numbers before the election to protest against Bolsonaro´s misogyny in the Elenão movement, it will take a concerted effort of all Brazil´s human rights and social movements, as well as individuals coming together, to protect democracy and ensure that Bolsonaro´s attempt to drag Brazil backwards does not succeed. The signs of both individual and collective resistance are there. I recently visited a private university in the city of Belo Horizonte, not noted for its activism, and was pleasantly surprised to be greeted at the entrance with a large sign declaring that “racism, sexism and homophobia are not permitted here”. Near the main public square, an individual artist has created artwork with the message of the American singer and civil rights activist Nina Simone: “Liberty is not having fear”. Bolsonaro may have planted seeds of hate, but they are being counteracted with seeds of hope.

Dr. Kathryn Lum is an anthropologist and Visiting Professor at Broward International University, Belo Horizonte, Brazil. Her latest publication is “The Dalit Closet: Managing Dalit Identity at an Elite University in India”, in Journal of Critical Education Policy Studies.