The European Network Against Racism’s new report shows that criminal justice systems across the European Union are failing to protect victims of racist crimes, despite the increase in violent racially motivated crimes.

Just over 20 years ago, the landmark Macpherson report showed that the UK police was gripped by institutional racism, and led to a shift in how the criminal justice system responded to racist crime. The report followed the police’s handling of the racially motivated murder of Stephen Lawrence, in which they did not take witness statements seriously, and skewed the whole investigation. A pattern that is common in many cases of racially motivated crimes, even the most serious, where justice rarely prevails.

Whilst the most prominent and serious racist crimes might sometimes make  headlines, most still remain invisible due to gaps in police and criminal justice systems. In fact, every year thousands of people experience unprovoked, often extremely violent crime, motivated simply because of people’s race, ethnicity or religion – real or perceived.

Macpherson triggered change across Europe, and we have witnessed some progress in legislation, guidance and training, but not enough has been done within the institutions themselves. Our new report focuses on how institutional racism in criminal justice systems across the European Union – the policies, practices and procedures within institutions – has a clear negative impact on how racist crimes are (not) recorded, investigated and prosecuted. It reveals how subtle forms of racism persistently appear in the criminal justice system from the moment a victim reports a racially motivated crime to the police, through to investigation and prosecution. This leads to what we call a ‘justice gap’: a significant number of hate crime cases end up being dropped.

Although most EU Member States have hate-crime laws, guidelines, policies or instructions to support the police, they count for little in a context of deeply rooted institutional racism within law enforcement authorities. The EU Framework Decision on combating racism and xenophobia by means of criminal law has resulted in a better understanding and commitment by Member States to addressing racially motivated crimes, but the practice and implementation of laws, policies and guidelines remain limited. 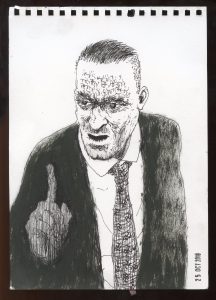 The mishandling of racially motivated crimes by the authorities, and in particular the police, starts with the recording of racist crimes. We see that police do not take reports of racist crime seriously, or do not believe the victims. For example, in Austria, “even after explicitly pointing out that the bias motivation must be recorded in the report, in a number of cases the police waived the issue by saying that it will be considered at a later stage of the proceedings”.[1] Racial stereotyping is at play from the moment a person of colour, a Roma person or a migrant reports a racially motivated crime. Racism in institutions can be based on ignorance, mistaken beliefs and unfamiliarity with cultural traditions. But it goes further than just a lack of understanding; racist stereotyping is a practice that positions racialised groups as potential criminals, untrustworthy, or trouble-makers. In Denmark, a victim of a racially motivated crime recalled:

As the perpetrators ran away, Ibrahim calls the police. The police arrive, but Ibrahim does not feel they are taking him seriously. At first the police reacted by asking: “Is it you who has been assaulted?” […] Ibrahim feels interrogated and is asked five or six times, whether he is sure about the incident. The police appear sceptical even though there are six witnesses who attest to what happened.[2]

In addition, both the lack of institutional response and victims’ negative experiences of the police mean that civil society organisations have to fill in the gap to ensure racially motivated crimes are properly recorded. Indeed, they often provide crucial support to victims anddocument the number of racially motivated crimes reported to them. The Greek Racist Violence Recording Network, for instance, records incidents on the basis of interviews conducted with the victims.[3]

Furthermore, the racial bias of a crime can sort of ‘disappear’ in the course of a police investigation. The power to declare what is or is not a racist crime to be investigated is in the hands of the police officer, not the victim.This leads invariably in the victim being silenced if their definition or declaration of the ‘racist’ element is not shared by the police. The police also find it more straightforward to investigate crimes such as the violation of public order, or crimes against property, than uncovering evidence of the bias motivation. In Bulgaria, for instance, in a current pre-trial case, it is the element of hooliganism, and not the racist motivation, that is being investigated (at the time of research 2018/2019).

Several factors hinder the successful prosecution and sentencing of a hate crime with a racial bias, including: lack of proper recording of the racial elements of the crime; poor and inadequate investigation; the police and the prosecution working in isolation; lack of clear definitions of hate crime with a racial bias; absence of training and limited capacity; and under-use of the aggravated ‘hate’ clause.

If the bias motivation is systematically filtered out at different levels of the process, whether it is during the investigation, the prosecution or judgement, it indicates institutional racism. A case in Italy illustrates this point:

A man of Nigerian origin was beaten to death in Fermo, after two men shouted racist insults at the man and his wife in the street and he reacted to the insults. The main author of the crime, affiliated with a far-right group, was arrested on charges of manslaughter, aggravated by racist motives, but his lawyer, together with a part of the local and national media, supported the thesis of legitimate defense. The man later received a reduced sentence of four years in house arrest.[4]

Policies, guidance and training to combat and respond to racist crime are an improvement but they are not sufficient. Governments and institutions still need to improve day-to-day practice by, for example, monitoring how effectively officers are responding to hate crimes, and by developing plans to improve relations between the police and racialised communities.

Safety and justice for people of colour, minorities and migrants will only happen if institutions and decision makers commit to removing racist structures and practices within the criminal justice system. Ultimately, police and prosecutors have a responbility to hold the standards and values of our society.

Ojeaku Nwabuzo is Senior Research Officer at the European Network Against Racism (ENAR).