by Nicholas Mithen May 2022

In his 1962 Letter from Birmingham Jail Martin Luther King railed against “the white moderate… more devoted to “order” than to justice”.[1] For MLK, the liberal appeal to moderation in the resistance against racial oppression actually worked to enable racial injustice. The reasonableness of incremental reformism failed to identify and challenge endemic structures of racial discrimination.

The assumption is that due to inherent contradictions within liberalism moderation becomes, tacitly, racialized against minorities who suffer, and resist against, prejudice in a political system. There was little tacit about the racial character of moderation praised by the Victorian arch-liberal Walter Bagehot in his Politics and Physics, written almost a hundred years earlier. For Bagehot, ‘animated moderation’ was the supreme civic virtue, “the rule of a polity which works by discussion”, a virtue, moreover, that he considered to be the preserve of the English, as the pinnacle of western man[2] It was the Englishman’s ‘animated moderation’ which set him apart from the ‘eastern peoples’, who lived as pre-modern man had always lived, slaves to custom, lacking a desire for progress or innovation. ‘Animated moderation’ informed the civilizational agenda of colonialism, “attempting to put new wine into old bottles – to pour what we can of a civilisation whose spirit is progress into the form of a civilisation whose spirit is fixity”.[3]

Today, moderation is still identified as a civilizational concept, lauded by conservatives and liberals keen to preserve ideals of civility,[4] and condemned by radicals and progressives for whom it signifies a cowardly defence of the status quo.[5]

That both parties can appear right points to the tensions contained within the modern idea of moderation. These tensions rise to the surface when moderate attitudes to race are invoked.[6] Early modern history can open a window onto the origins of these tensions.

The appeal to moderation as a political virtue has an ancient and global history. Modern ideals of political moderation, however, were developed in sixteenth century Europe. They took shape in response both to the breakdown of the moral and political authorities of the Middle Ages, and to the confessional ruptures of the wars of religion which shattered Christendom. These developments coalesced in France, where they met with the emergence of the modern state, and modern political thought. We see this nexus in the thought of Jean Bodin, the towering intellectual of the late 16th century from Angers, who furnished moderation with a clear civilizational significance.

In Bodin’s Les Six livres de la Republique (1576) he mapped out his theory of absolute sovereignty – independent and supreme political power – raising the institution of the monarch above confessional interest.[7] This notion rested upon his theory of ‘harmonic justice’, rooted in concordia discors, or discordant harmony.[8] Harmonic justice represented, for Bodin, a middle way between the justice of the aristocracy, and democratic justice. The discordant harmony of harmonic justice is defined by the managed tension between two extremes: 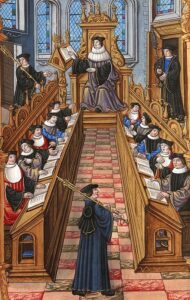 Meeting of doctors at the university of Paris, circa 1500s (public domain)

Wherefore as of Treble and Base voyces is made a most sweet and melodious Harmonie, so also of vices and virtues, of the different qualities of the elements, of the contrarie motions of the celestiall Spheres, and of the Sympathies and Antipathies of things, by indissoluble meanes bound together is composed the Harmonie of the whole world, and of all the parts thereof: so also a well ordered commonweale is composed of good and bad, of the rich and of the poore, of wisemen and of fools, of the strong and of the weake, allied by them which are in the meane betwixt both: which so by a wonderful disagreeing concord, joyne the highest with the lowest, and so all to all.[9]

This state of compromise, of a middle way, reflects, for Bodin, the human condition, “betwixt beasts and angels”. But a capacity for ‘harmonic justice’ is not a privilege of all humans. The world’s people are, Bodin argued, divided into three sorts: those of the north, who are phlegmatic and govern by force; those of the south, who are melancholic and govern by religion; and those of the middle, between these extremes, who “participate of both their natures and have their affections more moderate”.[10] It is these people who rule by ‘harmonic justice’, reason and law, who “negotiate, traffique, judge, plead, command, establish Commonweales; and make lawes and ordinances for other nations”.[11]

This middle stratum stretched in a band from Spain in the West to Turkey in the East. It manifests itself culturally best in Italy, which Bodin thought the “most temperate that can be”, and politically in France, exemplified in the nascent modern state Bodin was helping to theorise.

On the surface, Bodin’s climactic categorisation of peoples is close to those invoked in antiquity and the Middle Ages, as is his identification of moderation with those of the middle. But two features are of note.

Firstly, his explicit inclusion of “Asia the lesser… the mirror of civilitie”[12] into the domain of civilized moderation. This speaks to Bodin’s expansion of the category of acceptable religious belief beyond the limits of his own Catholicism, or even Christianity broadly defined. In his posthumous Colloquium Heptaplomeres Bodin staged an imagined dialogue between members of Christian confessions, a Muslim, a Jew, and two philosophers. The Colloquium showcased the possibilities of religious accommodation between those subscribing to Abrahamic faiths or natural religion – of pagans and atheists Bodin was more suspect.[13]

Secondly, Bodin’s climactic model of peoples opened up the possibility of development for societies – it was much less rigid than previous notions of humanity. In passages, he suggests that societies can escape their climate, remarking “what force education, lawes and customes have to change nature”.[14] Germany was, for Bodin, an example of what had once been a typical northern nation, but has, in his time, learned to be a people of the middle.

Subsequently, for Bodin, the moderation of temperate Europe is no longer the result of climate, nor of confession – though Europeans remained ‘naturally’ inclined to a moderation which remained bound to monotheism. Bodin elevated the function of ‘the political’ in establishing a people’s characteristics. On the one hand, moderation could escape the proto-racialised categories for humanity deployed by pre-modern thinkers. Different peoples could, theoretically, become more moderate through changing their political, legal or educational institutions. On the other hand, and precisely because it rendered the nature of a people as historically rather than providentially determined, Bodin strengthened the association between monotheistic inhabitants of the Mediterranean basin and a species of moderation which was civil, not natural: a political artefact of human invention.

On these terms, Bodin’s civil moderation, constructed upon concordia discors, contains, in germ form, the ‘animated moderation’ which Bagehot would racialize as the genius of liberal English modernity, and which Martin Luther King would see as a racialized expression of a White monopoly of reasonableness. If this is true, it’s also the case that, in contributing to the invention of the political world as an autonomous domain, Bodin was laying the foundations for a civil realm in which religious, and, in time, ‘racial’ differences could be mediated by the state.

In sum, the early development of the political framework for managing racial difference in the West was contemporaneous with the development of the ideological framework through which racial difference would be established. Such are the contradictions at play in the pre-history of liberalism, contradictions apparent in the thought of Bodin, and which nestle at the core of the modern concept of moderation. Uncovering these contradictions may help us to see the complexity of the Western state, and that the struggle between liberty and prejudice is inescapable in our version of modernity.

Nicholas Mithen, an intellectual historian of early modern Europe, is currently a Marie Sklodowska-Curie Research Fellow at Newcastle University, UK. Dr Mithen looks at the ‘moderate’ culture of intellectual reformism which took root on the Italian peninsula in the ‘early Enlightenment’. He is the founder of The Moderation Project. https://moderationproject.com

[2] Walter Bagehot, Physics and Politics: Or, Thoughts on the Application of the Principles of “Natural Selection” and “Inheritance” to Political Society, New York, 1983, pp. 200-4.

[4] See, for instance, the conference, Beyond Left and Right: Reviving Moderaiton in an Era of Crisis and Extremism, Niskanen Center on February 25, 2019

[13] Jean Bodin, Colloquium of the Seven about the Secrets of the Divine, translated and with an introduction byMario Leathers Kuntz, 2008