The SARS-CoV-2 pandemic has not only caused human tragedy, suffering, and death and changing the everyday lives of people in ways that seemed unimaginable before; it also brought forth a concerning wave of xenophobia and racism, targeting suspected or imagined carriers of the disease. Indeed, the disease has come to be viewed through the prism of race. Donald Trump famously spoke of a “Chinese virus”,[1] and Asian-Pacific Americans’ advocacy groups reported terrifying increases in discrimination, verbal abuse, and physical assaults.[2] The London Metropolitan police has been twice as likely to fine black people over supposed breaches of lockdown rules.[3] An Austrian tabloid warned that refugees could carry the virus to Europe,[4] and the far-right German Alternative für Deutschland party called for the closure of the borders to asylum seekers.[5] The targeting of refugees and migrant workers and the closure of borders had in fact been on the agenda of many right-wing politicians for a long time, many of whom believed that the current crisis would be a chance to fully implement these demands.[6] From the start, race and racism were at the centre of the pandemic.

As alarming as the targeting of minorities and migrants is, this phenomenon is not new. One such historical precedent is the typhus-epidemic in German-occupied Poland during the First World War (1915–18). The parallels with the current situation are chilling, in particular how the racialized conceptualization of disease by doctors and officials shaped public health and policy response in a way that targeted minorities. 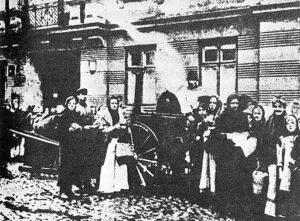 When the armies of the German and Habsburg empires conquered Russian-ruled Poland in 1915, their doctors, soldiers, and bureaucrats found themselves confronted with a disease that was largely new to them, and whose spread especially in the urban centers of Warsaw and Łódź was of great concern. Typhus (typhus exanthimaticus),[7] a louse-born infectious disease, spread wildly amongst the starving population in crammed neighbourhoods from the winter of 1915/16. While the disease had been present in large parts of Eastern Europe before the war, the conditions created by the German offensive and occupation allowed the epidemic to spread. Large numbers of displaced people flocked to the major cities, where they  crammed into tiny apartments and underground dwellings. Exhausted by hunger, and suffering inadequate sanitary conditions, tens of thousands were infected.

Paranoid that their soldiers and bureaucrats would be struck down by typhus, the Germans established quarantine hospitals and delousing facilities, and cracked down brutally on anyone suspected of being a carrier of the disease. From the very beginning, these measures were targeted directly at the Jewish population. Police and sanitary inspections focused on Jewish neighbourhoods, and local health authority reports increasingly associated the disease with Jewishness. Indeed, the authorities shifted focus from treating typhus as a public health problem to a perceived racial problem. The key figure in this process was German Medizinalreferent (chief medical officer) Gottfried Frey, who in one report described typhus as “a truly Jewish disease”.[8] “The Pole”, Frey wrote, was “by nature cleaner than the Jew”. If non-Jews did contract the disease, it was, according to Frey, because they had been in close contact with Jews or because they “had adopted the filthy habits of the Jews.”[9] Getting the illness was understood as becoming Jewish, violating the boundaries of race.

The German administration assessed that about 95 percent of people infected were Jewish. Other sources point to lower numbers, but the statistical data gathered in occupied Poland was highly unreliable, and points to the amalgamation of racial and medical-scientific concepts. In any case, statistical data points to higher mortality rates per cases amongst non-Jewish Poles, and high regional variations. There are two key reasons for this: first, in rural areas, where fewer Jews lived, the medical infrastructure was underdeveloped, cases of typhus were rarely detected or reported. Second, crucially, the Germans’ conviction that they were dealing with a “Jewish disease” made them focus all their efforts on policing the Jewish population, and thereby automatically detecting more cases.

Neither the conceptualization of the disease in racial terms, nor its association with Jewishness, were ‘natural’ conclusions; they stemmed from strategic decisions made by doctors and bureaucrats. The German head of the Institute for Hygiene in the multiethnic city of Łódź, for instance, excluded race from his empirical study, and, instead, focused his attention on sex and age, which he considered to be key to an understanding of the disease. A doctor stationed in a German field hospital in Istanbul at the same time, attributed typhus primarily to the Greek “race” while believing that Germans, Turks, and Jews were largely immune.[10]

The narrative on the disease in Germany was largely shaped by medical professionals and bureaucrats who were convinced that ‘race’ was pivotal to understanding and tackling the disease. This notion fed into the wider logic of the German nationalist and antisemitic struggle for the purity and health of the Volkskörper (the national body). German antisemites had for a long time called for an end to Jewish immigration; the ancient delusion of Jews as spreaders of disease was a major part of their rhetoric. The war revitalized this debate, and in April 1918 the German government closed its borders to the immigration of East European Jewish workers, who had come to work in the German arms industry in large numbers. Despite the fact that there were hardly any reported cases of typhus amongst Polish-Jewish workers in Germany, this measure was justified by the supposed protection of public health: “A special hazard derives from the entire population’s ineradicable uncleanliness in regard to matters of health. For a great part lice-ridden, the Polish-Jewish workers are particularly likely transmitters of typhus and other infectious diseases.”[11]

The border remained open for Christian Poles, but was closed to Jews until the 1920s – for the fact that they were Jews. The antisemitic defamation of Jews as spreaders of disease, and especially typhus, came to be a central element of antisemitic propaganda in the following decades, and was an important feature in the persecution and mass murder of Jews when the Germans returned to Poland in 1939.

A comparison between the 1915–18 typhus epidemic and the current situation highlights the way in which race remains a central factor in the way not only far-right demagogues, but also public officials, journalists, and even some scientists, approach the medical crisis. Attempts to explain the higher mortality rate amongst minority communities with supposed genetic predispositions speak to this logic, as do (in reverse) deliberations that aim to explain some Asian countries’ low infection rates in reference to genetic factors.[12] But both SARS-CoV-2 and typhus completely disregard such human-made categories. Indeed, as one Jewish response to the ban on immigration in 1918 read, the disease was “unsurpassably objective”.[13] It is humans who discriminate. Their decisions, in regard to structural inequality, racist discrimination, and public health policy, place race at the centre of disease—not developments in the natural world.

Dr. Jan Rybak is an Early Career Fellow at the Birkbeck Institute for the Study of Antisemitism, University of London, UK. He is the author of ‘Everyday Zionism in East-Central Europe: Nation-Building in War and Revolution, 1914-1920’, published by Oxford University Press (2021).

[6] For example: Maanvi Singh, “’We need the Wall!’: Trump twists coronavirus fears to push his own agenda,” The Guardian online, 11.03.2020 https://www.theguardian.com/us-news/2020/mar/11/donald-trump-coronavirus-politics