In 2017, antisemitism and Islamophobia were, along with other racisms, on the rise 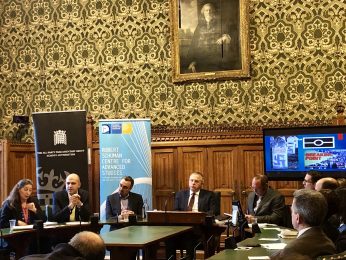 around the world. In Charlottesville in the United States, far-right militants marched chanting against the world Jewish conspiracy. In Myanmar, Muslims fled for their lives to Bangladesh. In the UK and Europe, these racisms also continue to flourish. But are they connected? In the aftermath of 9/11, controversy has raged about whether Islamophobia is the new antisemitism.

MONITOR chose this pressing issue for its first public event. The location: the UK’s Houses of Parliament, hosted by the All-Party Parliamentary Group Against Antisemitism.

The magazine aims to bring cutting-edge research into global public debate, and this collaboration was the ideal place to start. The Editor, Monica Gonzalez Correa, flew in especially from Florence.

The aim of the event was to present and debate the findings of new research, edited by myself and James Renton, MONITOR’s academic advisor. We wanted to stimulate new ways of thinking and the basis for action among a rich audience of policymakers, NGOs, and scholars. The discussion panel was impressive: Sally Sealey, the senior official in the UK Government’s faith and integration unit; Omar Khan, the Director of the UK’s leading equality NGO, The Runnymede Trust; and Danny Stone, the Director of the Antisemitism Policy Unit. The Chairs were leading figures in the Parliamentary Group, MPs Louise Ellman and John Mann.

We gathered in Committee Room 5 in the House of Commons— a room with all of the traditional grandeur that one would expect, bedecked in green and gold wallpaper, wood panelling, a high ceiling and tall windows. At the front, our panel sat beneath a portrait of the 18th century MP, William Windham of Earsham, and were flanked by the signs of the All-Party Parliamentary Group, and the Robert Schuman Centre for Advanced Studies at the European University Institute, where MONITOR is based. Many in the room took MONITOR postcards, illustrated with cartoons by Damiano Restivo from the first issue. And James Renton invited the audience to follow contemporary social media etiquette by browsing MONITOR on their phones while we spoke (the Editor had arranged for a sneak preview of the magazine to be online for one hour only). 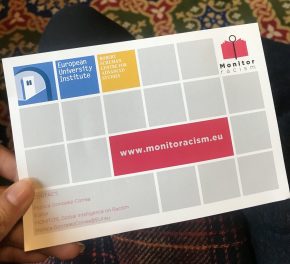 These kind of academic briefings, whether in Brussels or London, can be poorly attended. Not this one. There was a rare energy in the room, packed with Lords and scholars; NGO’s, such as the Jewish Community Security Trust and football’s ‘Kick It Out’; and government, with delegates from the Home Office Extremism Unit.

In our presentation of the new research, James Renton and I explained that comparing antisemitism in the past and Islamophobia in the present does not get us very far. Nor does some kind of zero-sum competition between the two racisms. Instead, we need to understand the complex differences and similarities that have evolved in different times and places over the last one thousand years of their shared story.

The two racisms, we argued, are undoubtedly connected in the deep Christian history and present of Europe’s intellectual universe. They are not the same, however, nor should we expect them to be: Judaism and Islam possess a very different relationship with Christianity. Nonetheless, their histories are intertwined. Our task is to understand where they overlap and where they differ, whether that is in the idea of a Jewish/Muslim world conspiracy, or the fear of the ‘extremist’.

In the debate that followed, which you can listen to here, Omar Khan argued that if we do not understand the differences and similarities between antisemitism and Islamophobia, we will develop the wrong strategies and policies. He warned against those who only fight “their own” community’s experiences of racism without a wider anti-racist framework. Sally Sealey, similarly, contended that if you are not against all racisms you’re part of the problem. She showed this by describing how spikes in hate crimes trigged by terror attacks or Israel/Palestine events soon diffused across the board to other groups.

Danny Stone spoke of the importance of tackling individual prejudices, including Jewish Islamophobia and Muslim antisemitism. He discussed how social media and the crisis in trust attached to it has circulated global and transactional forms of racism. Danny then outlined a series of practical steps that could easily be made to tackle hate, for instance a more robust risk register from the UK’s new Office for Students or giving groups, as well as individuals, recourse through Britain’s press charter. John Mann also argued that measures developed for tackling anti-Jewish hate are often transferable to tackling other forms of hate.

The discussion was highly energised, and showed a profound desire for shared 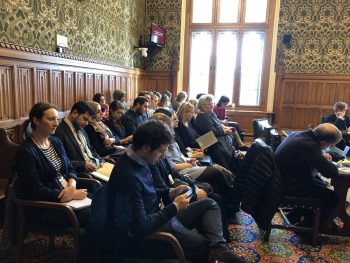 activism against both racisms. It was striking to us that there is a new appetite for this kind of collaboration, among individual activists, NGOs, and government. Several Lords, sitting at the front, made probing contributions, as did members of the Jewish and Muslim women’s group Nisa-Nashim, the Community Security Trust, and the Conservative Muslim Forum, among others. There was a real excitement for the new history that we presented, as something new that can be the basis for a different kind of activism.

The discussion raised a wide range of themes, such as how the right instrumentalises Jewish insecurity to mainstream its Islamophobia, despite old antisemitic agendas lurking just beneath the surface; and how practical opportunities for mundane positive contact could be effective in breaking down myths.

Several participants were keen to seize the momentum and develop future collaborations to promote the shared history of the two racisms around the country. Danny Stone recommended that this would be an excellent project to be supported by government. 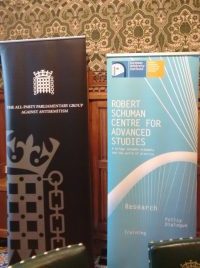 These are dark times for Jews and Muslims in Europe. As we wrote in the opening pages of our book. It gives us no pleasure to note that, in the years we have been working together on the project of understanding antisemitism and Islamophobia together, it has become no less relevant. Violence, terror, suspicion, surveillance, exclusion and hatred have become normalised features of the European public landscape; the fault-lines between Muslims and Jews become more tense, while the shared task of combating European racisms becomes more urgent.

Our book was intended to generate a deeply historical and rigorously comparative understanding of each form of racism, an understanding which respects what is specific as well as what is shared, what mutates as well as what is continuous. MONITOR’s parliamentary event showed us that there is a widely shared enthusiasm for this project in both communities, among anti-racist activists and among policy-makers. We now need to build on this energy, and take action.

Ben Gidley, is Senior Lecturer in the School of Social Sciences, History and Philosophy at Birkbeck, University of London. He is the co-editor, with James Renton, of “Antisemitism and Islamophobia: A Shared Story?”, Palgrave Macmillan (2017).