Back in 2016, this slogan made headlines as it travelled across Great Britain on a red bus. While the veracity of the claim was challenged, including in the courts, it came back into the news during the coronavirus pandemic as people call for increasing funds for the National Health Service (NHS). And last year, several Conservative politicians claimed vindication for the slogan’s sentiment by arguing that vaccine approval in the UK was sped up by having national-only control of the process.

Though still not quite true, the claim underscores the Euroskeptic position that local (national) control of government is best. Political parties across the member states of the European Union contest the amount of authority lodged in the EU instead of in national governments. These types of fights over proper government, and whether rules and legislation issued elsewhere benefit or harm locals, are nothing new. My research peers back to medieval Europe to uncover how authority conflicts affected the treatment of Jews.

A Battle for Authority

In the medieval Holy Roman Empire, city governments and the emperor squabbled over what each owed the other, in terms of taxes. Similar to the EU, the Empire was something of a confederation, and the emperor depended on participating principalities and cities for income, for military support, and ultimately for legitimacy as a ruler. Various treaties and agreements outlined the rights of each participating government and the extent of the emperor’s control in their territories. Some cities were well-resourced and powerful enough to challenge the emperor and provoke renegotiation over these rights.

From the 1430s, the emperors increasingly meddled in civic life via rights they held over the residence and taxation of Jews. Jews were directly under the authority of the emperor. They lived in the Empire only where the emperor had given them permission to do so, and they were also taxed directly by the sovereign. Emperors began to be aggressive about levying taxes on Jews, who had to increase costs of business with their neighbours in order to meet their burdens.

Cities understood imperial taxes on Jews to be indirect taxes and power grabs. Because of their legal position, Jews could not be expelled, imprisoned, or killed without threat of punishment by the emperor. In 1443, the city government of Constance, in southern Germany, imprisoned the city’s Jewish residents. The city effectively held the Jews ransom for five years, all the while negotiating with Emperor Friedrich III over the conditions of their release.

Jews had lived in Constance continuously for over 50 years and established a community of one or two dozen households. When nearby cities had committed pogroms, Jews in Constance remained relatively safe. Jews had civic responsibilities and access to citizenship that classed them similarly to Christian residents, as opposed to foreign Christians from other cities or regions.

Civic strife in Constance in the 1420s pushed the city to reconsider who should be a member of their community. The major issue was the consolidation of a new class of elite merchants and nobles who were intermarrying. This mixing made the civic community suspicious of city residents whose economic and political positions in the city created dual, conflicting loyalties. The city conflict was resolved in 1430 through the mediation of Emperor Sigismund, who visited to listen to the arguments, assess the situation, and instruct the city on civic reforms. Sigismund also took the opportunity to reassert legal and financial control over the city’s resident Jews. Sigismund fined the Jews and used the proceeds to pay off high debts he had accrued in Constance while in courtly residence there a decade earlier. 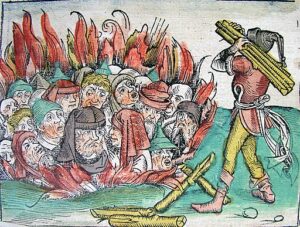 The Christian-controlled city government then placed new restrictions on Jewish economic activities. By making the conditions of residence inhospitable, the city tried to force all Jews to leave, and many did emigrate. City records concerning Jews were moved to the register for foreigners, not locals. Jews were increasingly alienated by the Christian government and then, in 1443, jailed.

The result of five years of negotiation between Constance and Emperor Sigismund was the relocation of the city’s Jewish residents to lands governed by his brother Albert, the Habsburg Duke of Austria. With this forced migration, the city solved a political issue of rightful authority as well as a symbolic question about who belonged to the city community.

The cruel treatment of the Constance Jews was enabled by medieval antisemitism. The Constance government’s actions demonstrate increasing distrust of Jews, a medieval version of systemic racism. Imperial policies that financially exploited Jews provided increased rationale for the mistreatment of Jews at the hands of the city government. Ultimately, what appears at first glance to be a process of group-targeted exclusion was embedded in a larger tug-of-war between different governments in the Holy Roman Empire.

It is not a coincidence that Euroskepticism shares with fifteenth-century Constance the elements of revolt against a central government and backlash against minority groups. Arguments for national control are furthered by racist, anti-immigrant rhetoric. These links are well-documented concerning the Brexit referendum. On the Brexit bus highlighting the NHS, the smaller-size but bigger-impact text was the call to “take back control”. In the midst of the Syrian refugee crisis, EU refugee resettlement negotiations, and on-going immigration within Europe, many British citizens voted to take control over immigration. They voted to end what they saw as EU meddling in their national community and national economy.

Kerice Doten-Snitker is a Postdoctoral Fellow at the Institute for the Study of Religion, Economics and Society at Chapman University in Orange, California, USA.