Blackness occupies a global position that resists analogy. This is the idea, central to Frank B. Wilderson’s Afropessimism, that is illustrated by an unsettling autobiographical scene in the book’s opening pages. Flashing back to an earlier time in Wilderson’s life when he was working as a guard at Minneapolis’ Walker Art Center, he describes his friendship with a Palestinian photography student named Sameer, also a guard at the museum. Originally from Ramallah, Sameer tells Wilderson about how he longs to return to Palestine and contribute to the First Intifada that had just begun. Wilderson in turn tells Sameer about his own earlier dreams of travelling to fight against white minority rule in Rhodesia. Their mutual desire for revolution is what binds them; a politics of insurrection catalyzed by a shared sense of loss. Initially, Wilderson understands the multiple violations his status as a black man in America engenders to be analogous to those attached to Sameer’s existential position of statelessness. Until, that is, the two have a conversation in which Sameer details the texture of daily life under Israeli occupation. “The shameful and humiliating way the soldiers run their hands up and down your body,” he says, before adding, “But the shame and humiliation runs even deeper if the Israeli soldier is an Ethiopian Jew.”[1] “The earth gave way,” Wilderson writes.[2]

It’s a profoundly painful moment that for Wilderson destroys the possibility of solidarity. For anyone invested in Arabic, Islamic, or Middle Eastern history and culture (personally, professionally, or both) the scene is harrowing. So much of our time in the classroom, particularly if we teach in North America or Europe, is spent both pushing back against Islamophobia and making visible the continuing human rights abuses enacted in Palestine.[3] An instance of anti-Black racism voiced by an embodiment of the Palestinian experience highly attuned to the way structures of injustice work presents us with a profound aporia; how do we move beyond the impasse it represents? This may seem far afield from the topic of my article: Blackness in Morocco’s early modern historiographic literature (works about past historians and their accounts) concerning West Africa. But our conference, Centring Race in History: Antiquity to the Present, asked what it would mean to centre race in our academic inquiries, and when it comes to the Middle East and North Africa the anecdote captures well the difficult terrain involved. We don’t yet have an adequate answer to the question of how we arrive at the moment of fracture Wilderson describes.

Returning to the conference’s guiding question: my article title centres blackness, sidestepping the term race, contentious in the period it discusses, the 16th to early 19th centuries, before European colonial rule in North Africa. Mahmood Mamdani put it well when he observed that the word race connotes “the language of a scientific narrative that naturalizes inherited privilege by grounding it in biology.”[4] The stark immutability this implies can’t easily be grafted onto the precolonial societies of the Middle East and North Africa. Focusing instead on the vocabulary actually used in the textual language of the time can offer a more productive ground for discussion. 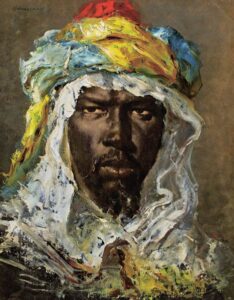 In Arabic, there are several terms for blackness, not at all equivalent with one another. In the 16th – 19th century Moroccan taʾrīkh (history/chronicle) texts that are the subject of my inquiry that word is al-sūdān (the blacks), a term that combines skin colour and a specifically West African geography. It has links to a number of historical phenomena, from the Arab slave trade, to the propagation of the Hamitic myth that ties blackness to servitude, to the Mediterranean-centric geographical theories inherited from the Greeks. Yet the degree to which these phenomena have been implied by the word has varied over time. If we want to understand how blackness has been understood in the Arabic tradition in any real way, we have to limit the scope of our inquiry and focus on small scale histories and events.

I do this by looking at accounts of Morocco’s 1591 invasion of the Songhay, a West African empire immediately south of the Sahara Desert, focused on two important texts: Abd al-‘Azīz al-Fishtālī’s (d. 1621 or 1622) 16th century Manāhil al-ṣafā fī ma’ āthir mawālīnā al-shurafā’ (Fountains of Serenity Describing the Events Affecting Those Descended from the Prophet) and Aḥmad al-Nāṣirī’s (d. 1897) 19th century Kitāb al-Istiqṣā li-akhbār duwal al-Maghrib al-Aqṣā (The Book of Investigation about the Dynasties of Morocco) – The event itself was momentous, marking the end of one of the last great medieval African empires. It was also a significant violation considering the religious and intellectual ties that had historically bound these two Muslim polities together. A close look at the original chronicle of the invasion written by al-Fishtālī (the Moroccan sultan’s scribe), and the later Moroccan historiographies that followed, allow us to see quite clearly the mutability of blackness within the Arabic textual tradition. In the official 16th century chronicle by al-Fishtālī, West Africa’s blackness is used as a justification for the invasion, mobilized to depict Sub-Saharan Africa as unmistakably alien, despite the shared religion between them. While this is analysed in detail in my current book project, the shape of this rhetoric is visible in the opening lines of a poem describing the invasion penned by al-Fishtālī and included in his chronicle:

Like the larger account of the invasion in which it is included, the poem is structured by an unmistakable dualism in its depiction of a battle where the invading army’s whiteness succeeds in overtaking the darkness of West Africa (the night’s blackness “annihilated” by the Moroccan army’s light). In the chronicle’s account, this ultimately enables the region’s entry into the Muslim community; absent is the fact that West Africa had already been a part of the Islamic world for hundreds of years.

While al-Fishtālī’s depiction of the sudān (West Africans) as a people wholly outside the boundaries of Islam, Islam itself is notably explicit in its insistence on equality between Muslims, positioning piety as the exclusive marker through which humanity should be judged: Qur’an 49: 13:

O mankind, indeed We have created you from male and female and made you peoples and tribes that you may know one another. Indeed, the most noble of you in the sight of Allah is the most righteous of you.

Of course, al-Fishtālī’s 16th century official text is necessarily polemical, commissioned as it was by the invading sultan. Yet, by the 19th century the kind of depictions we find in it had become commonplace in Morocco, at least according to the 19th century historian al-Nāṣirī.

In his own chronicle – a text that includes within it large sections of earlier chronicles verbatim (a practice typical of pre-20th century Arabic historiography) – al-Nāṣirī turns to the same type of rhetorical tools internal to the Arabic tradition that al-Fishtālī and others had used to equate blackness with non-belonging, only he mobilizes them to the opposite effect. Al-Nāṣirī first acknowledges the connotations that have gradually become attached to blackness in his local context:

Many people have come to believe that the Islamically legal requirement for slavery is black skin and being from this region [the bilād al-sudān, or West Africa]. By God, this is among the most terrible of practices according to religion. For the people of al-sudān are Muslims and therefore have the same rights as us and are subject to the same duties. [6]

He then turns to the concept of sadd al-dharā’i‘, (literally, “closing off the means that can lead to evil”), a frequently used idea in the Maliki legal school to prohibit practices likely to lead to an illegal or harmful result. Pointing to both the impropriety of the age and all the uncertainties of the institution of slavery (i.e. the difficulty of verifying the religious status of the enslaved – crucial since only non-Muslims could legally be enslaved), he insists upon the likelihood of the practice leading to illicit acts according to Islam. With slavery thereby positioned as effectively illegal, he reminds his reader of the need to continually reinterpret the tradition based on historical context. Slavery during the time of the Prophet (circa 7th century CE), al-Nāṣirī writes, was in the service of Islam as it conquered new territories and people were taken captive prior to their ultimate conversion. In contrast, at the time of his writing in the 19th century, slavery is simply contrary to the spirit of religion. Asserting that the inhabitants of sub-Saharan Africa are among those with the best Islamic practice (min aḥsan al-umam islāman), the most correct religion (aqūmihim dīnan), and the most learned in the Islamic sciences (aktharihim li’l-‘ilm),[7] he finally asks for forgiveness for slavery’s continuation by way of the Qur’an’s twenty-third chapter, sūrat al-A‘rāf (The Heights), verse 23:

Our Lord, we have wronged ourselves, and if You do not forgive us and have mercy on us, we will surely be among the losers

This reversal by al-Nāṣirī reveals the potential that inherited ways of thinking and forms of writing indigenous to the Arabic and Islamic tradition hold to foster inclusivity, even within the structure of Islamic law (widely thought to have been inimical to the abolition of slavery). It also demonstrates that the kind of anti-Blackness experienced by Wilderson isn’t something fixed within the intellectual history of the Middle East and North Africa, but is rather highly dependent on particular geographical, historical, and socio-political circumstances; it is subject to change. This does not tell us precisely how we arrive at Wilderson’s encounter, but it might help us toward how we need to look for its origins.

Gretchen Head is an Assistant Professor of Literature at Yale-NUS College, Singapore.

[3] I should admit that I, myself, hesitate in writing these lines. At the same, as many scholars like Eve Troutt Powell, Ella Shohat, and Ghenwa Hayek have noted, the silence around this issue within the Middle East and North Africa has been pervasive, and highly problematic. The widescale breaking of this silence within the past year has been remarkable.