Definitions of humankind have a long history of misuse: they have been deployed to elevate some ‘humans’ over others, and the animal kingdom. In addition, regional and partial conceptions of the human being  are often presented as universal.[1] Despite these difficulties, some have found new life in defining what it means to be human on a general level, thinking through human vulnerability[2] as the starting point for ethics.[3] But dwelling on the fragility of being human invites the acknowledgement of limitations and conditions that are too low, too humble, and too exposed for some to endure.

These tensions with the idea of what defines the human as a being emerge already in the comedies of the Roman playwright Terence. Likely brought to Rome as a slave from North Africa, Publius Terentius Afer, to use his Latin name, took up the poet’s craft after gaining release from slavery— manumission. While the identity of his first language is uncertain, Terence translated and adapted Greek new comedies into Latin for audiences in Rome.[4] While critics agree that Terence developed the humanism he encountered in Greek new comedy, with his frequent mention of “homo”, “humanus” and the like, analysis has been hampered by the loss of most of his source material.[5] Still, we can get a sense of Terence’s project by considering how appeals to human identity and the human condition operate within their overall dramatic framing and within the cultural milieu of Rome in the second century BCE.

Terence’s treatment of the human often conjoins irony, parody, and intertextuality to expose the biases built into society as to who can be deemed on a par with others.[6] In this article, I will briefly sketch the irony and promise of a humanist ethics as portrayed in one play, Terence’s Self-Tormentor. While the comedy roots ethical obligation in a vision of the human condition as one of ineradicable vulnerability (both physical and in a shared consciousness), the play also offers a hard-nosed assessment of the barriers to realizing this ideal in ways that prefigure recent conversations about the fragility of being human as a ground for ethics.

As often, Terence’s play opens with a scene that foregrounds the principal issues at stake in the comedy, here the ethical significance of a certain conception of what it means to be human. Chremes, a wealthy old man, tells his new and obviously wealthy neighbour to put his slaves to work and to stop torturing himself with manual labour at his advanced age. In response, Menedemus – the neighbour – admonishes him to mind his own business, leading Chremes to justify his intervention with his well-known reply: “Homo sum, humani nil a me alienum puto” “I am human, I consider nothing human alien to me” (ST 77).[7] 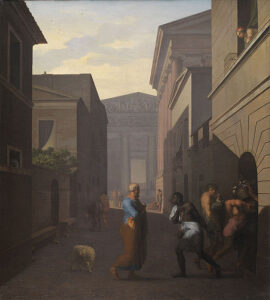 While modern commentators champion Chremes’ line both for the expression of identity and ethics it entails, classical scholars have been less enthusiastic.[8] This is because Chremes turns out to be spectacularly hypocritical, deluded, and self-centered.[9] But the disconnect between Chremes’ words and his character may be precisely the point; that is, the comedy is inviting us, audiences and readers, to consider what it takes to live Chremes’ claim. It does so by juxtaposing Chremes’ character and behaviour with that of the old man he seeks to help.

In the opening scene, Menedemus finally explains why he is ‘torturing’ himself with farm work. Enraged at the news his son was secretly treating a foreign woman as a wife, he verbally abused him until he (Clinia) finally abandoned home and country to become a mercenary in Asia. Now, months later, distraught with grief over his son’s fate and possible death, Menedemus recognizes his mistakes: he treated his son with violence (vi, 101) because he failed to consider his human – and particularly his emotional – vulnerability.[10] Although his son is shortly to return home very much alive— this is a comedy after all— Menedemus does not know this when he confesses to mistreating Clinia. Menedemus is capable of appreciating and responding to his son’s vulnerability (in retrospect) because grief has unmoored the illusions of independence and control undergirding his self-image.[11]

This bi-directional acknowledgement – in this case the recognition that shared psychological vulnerability is a two-way street – is especially difficult for Terence’s Roman fathers because their characters are informed by patria potestas (paternal power) – an institution unique to Rome that gave men enormous sway over their children, including the power of life and death.[12] This is not to say that Terence was critiquing contemporary problems in the Roman family arising from patria potestas; rather, he characterizes fathers through this institutional lens to shore up aspects of the Roman mindset – habits of command, mastery, and the desire for relational control– that made it difficult for Roman men to source vulnerability as a well-spring of ethical obligation.[13] In Menedemus’ case, however, grief acts as a solvent on this social conditioning, allowing him to recognize that he and his son were vulnerable to each other, despite the hierarchical nature of their relationship. By contrast, Chremes glibly cites his susceptibility as a reason for helping Menedemus, a virtual stranger, without really knowing what he is saying. Later, when Chremes learns that his son has been having an affair with a prostitute and deceiving him about it, he immediately turns to anger and retaliatory violence to shore up his flagging mastery.   Without the benefit of loss and grief to unsettle his pretensions of mastery, he lashes out and takes active steps to disinherit and disown his son.[14]

While Terence’s comedy, like recent theory, raises the possibility of ethical potential in an authentic reckoning with vulnerability, the Self-Tormentor also depicts the other side of the coin, namely that the unsettling experience of profound exposure may provoke denial and violence just as easily as ethical responsiveness – especially when one clings to an injured self-image and/or the sense of being wronged. Although Chremes’ angry reaction to his son’s behavior may be informed by Roman patria potestas, kneejerk retaliatory anger persists as a response to the experience of vulnerability in many contemporary cultures, including the US.[15] But, as Terence invites us to consider, deriving a moral compass from a recognition of human vulnerability requires overcoming resistance to certain ways of being human and relinquishing the illusions employed to sustain them.

Susan Lape is Professor of Classics at University of Southern California, U.S.

Gilson, E. (2014), The Ethics of Vulnerability: A feminist analysis of social life and practice (New York).

Wynter, S. and K. McKittrick (2015),  ‘Unparalleled Catastrophe for Our Species? Or, to Give Humanness a Different Future: Conversations’, in K. McKittrick (ed.), Sylvia Winter, On Being Human as Praxis, 9-89, (Durham).

[2] See Wynter and McKittrick (2015, 31) for the over-representation of the West’s “monohumanist” conception of “being human.”

[3] To be clear, Butler does not claim that human susceptibility to death and destruction creates an ethical obligation but rather that an obligation emerges because humans are “social beings from the start, dependent on what is outside” them and on others, institutions, and environments (2009, 23).

[5]Norwood observes that Terence’s “subject is [mere] humanity; hence the notable frequency in his pages of homo, humanus and other such words” (1923,150); for more recent discussion and bibliography, see Goldberg (2013, 161-62).

[7] Chremes obviously does not view the slaves as fully human, (noted in ST 65).

[8] Some recent citations of Chremes’ line include the remarks of Kwame Anthony Appiah:

We live with seven billion fellow humans on a small, warming planet. The cosmopolitan impulse that draws on our common humanity is no longer a luxury; it has become a necessity. And in encapsulating that creed I can draw on someone who’s a frequent presence in courses on Western  Civ., the dramatist Terence: a slave from Roman Africa, a Latin interpreter of Greek comedies, a writer from classical Europe, who called himself Terence the African. I don’t think, in other words, that I can make the point better than Publius Terentius Afer, writing more than two millennia ago. ‘Homo sum, humani nihil a me alienum puto.’ ‘I am human, I think nothing human alien to me.’ Now there’s an identity worth holding on to. The Guardian, Nov. 9, 2016, an edited version of his BBC Reith lecture.

More recently, Antonio Delgado appeals to Terence in an opinion piece in the Washington Post, June 2, 2020:

What is love? In times like these, it’s justice in action; it’s agency grounded in the moral observation that we are all one — that, as the Roman African playwright Terence wrote, “nothing human is alien to me.” And let us understand that love in action is hopeful without being a pushover; powerful without being destructive; schemeful without being sinister. It’s how change happens in a democracy set against the alternative that only might makes right or that only certain “men” are fit to govern. Here in America, we have committed ourselves to the noble idea that ordinary people can govern themselves — and do so freely (Antonio Delgado, a Democrat, represents New York’s 19th Congressional District in the U.S. House of Representatives).

[13] In Terence, the father-son relationship can model other hierarchical relationships, see especially Leigh (2004).